After a weeks' hiatus, Rob McGinnis was back posting to his blog yesterday. There were two significant pieces of news.

First, was the announcement of support for custom skydomes in the new expansion. This feature should help builders when they're using exterior areas but do not want the standard sunny day or starry night up in the sky. Maerduin mentioned these his most recent post, and they do offer some great opportunities--I can imagine that we might see some brilliant cutscenes if the sunsets he mentioned are ever implemented. Skyboxes were certainly a popular custom content feature in NWN1--I remember Hugie making great use of them in his modules.

The post also features some previews of some of the new sound sets for spellcasting. With the exception of the Warlock's spells, all spellcasting chants in NWN2 were originally taken straight from the original game. They work really well, but I'll be glad to have some new ones to listen to. The samples they provided sound a bit...well...silly without the swirling magic noises that typically accompany casting, but I'm sure they'll sound better in context. The Mass Fowl spell is pretty humorous in concept, though I worry that I might get a bit tired of hearing that particular chant if I use it with any frequency...especially the laugh at the end of it.

They also posted some screenshots of the new camera GUI. I'm with Maerduin in that I'm pretty happy with the current camera controls right now. But this new system seems like it will abolish some of the redundancy and complexity associated with the current four cameras, while at the same time giving users a bit more control. As long as the end result is basically identical to what I"m currently using, I'll be happy. Here's the strategy mode screenie: 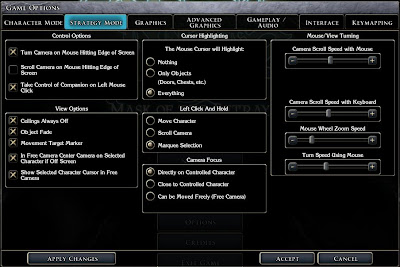 Finally, while this isn't related to McGinnis's post, I wanted to send out some props to Amraphael. In the process of creating his ZORK module, he has created some awesome custom content that he is already releasing to the vault. These include a wonderful "birdies" visual effect, as well as a gorgeous rainbow. I can't wait to see these in game.

It's just so refreshing to see someone taking the initiative to personally produce any content needs he might have in terms of content in the game, rather than just complain about how Obsidian hasn't given them enough monsters/placeables/whatever. I'm sure we'll see more of that once the Granny tool is released, allowing folks to make animated custom content. But, for whatever reason, it's been fairly rare thus far.

Anyway, major props to Amraphael--looking forward to your module!
Posted by Berliad at 6:49 PM