Pushing along with the Character Creator 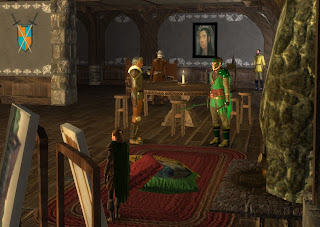 I think I've nearly completed my next update of the character creator. Just in time too, because I'm leaving town for Memorial Day weekend and won't be back until Tuesday...at which point I dive into teaching summer school, which will be five weeks of grading hell.

In addition to the basement with its library and shrine, there are now four new NPC's in the pub, plus an extra (currently underdeveloped) NPC downstairs who sells basic crafting materials. It feels far more lively in there than it ever did before--much closer to my original vision of what the module could be like. Sal's (overpriced) store is also much more interesting, thanks to new items from the Pool of Radiance and Subtlety of Thay.

The only major item I still have planned for the coming release is to modify Sal's dialog a fair bit to highlight all the new features and personalities of the module. Might be a touch up thing or two as well, though I think I got most of those items tonight.

Aside from continuing to add new NPC's and items as FRW modules are released, the only other major improvement that I'd like to make to this module is to add persistent storage. For now, however, that remains a pipe dream...
Posted by Berliad at 2:45 AM