Last night I played Cry Wolf by Lorft, which was surprisingly good given how little attention it has received from the player base. The vote of 7 might have been a bit conservative...I'm more and more enthusiastic about the module the more I think about it. Nevertheless, it doesn't quite rise to the level of something that I'd recommend to anyone...though I certainly think everyone should give it a look. :) My comments: 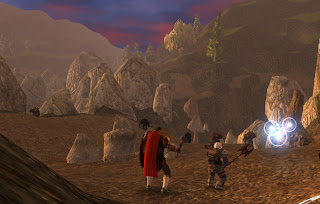 A well-polished module with a clever concept, an interesting take on the Grimm's Fairy Tales theme, the occasional good puzzle, very challenging combat, and a dollop of good humor, Cry Wolf is an overlooked module in the Obsidian module contest. In fitting with the theme, the module is narrated via a series of cutscenes with an old storyteller talking to a group of kids. The story itself is a twisted take on fairy-tale fantasies, which in this case are used to subvert and control a small village. 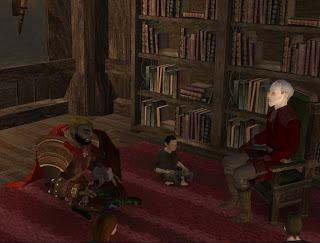 Combat in this module is, at times, very challenging, especially if you have an eye on the custom score system; resting drops your score by a percentage point each time, so if you're going to get a high score, you have to be careful with your spell usage. The challenges are variable, from single gigantic foes with massive hit points and damage dealing potential, to numerous foes who you have to engage with care, to foes who use mental attacks to disable your adventurers. Furthermore, almost all of the foes you fight are unique and interesting--not much here in the way of generic filler. I had a good time with these fights, though I think I might have found them a bit too difficult if the module had been longer...but it's not, so it worked! :)

I think the only real suggestion I have is related to the "beauty" theme that was introduced late in the module. I think this could have been better used if it was interwoven into the module's theme from the beginning... I don't have a great solution for how to do this, unfortunately, but it seemed to come out of no where at the end. Perhaps more development of the druid's character might have been the key to making it happen?

Nevertheless, an very good little module and one that I had a lot of fun playing. Thanks for sharing it with us, and good luck in the competition. This module should place very well.