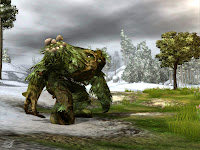 Aessinus and his son were able to catch Obsidian's presentation of the upcoming expansion for NWN2, Mask of the Betrayer, at A-KON last weekend, and have filed a report at NWVault. Interesting tidbits about the expansion from their report:
Update:
According to Kunikos, there have been two other base classes added to the game: the spirit shaman and the duskblade. I haven't seen references for this information yet, but I haven't been following the MotB news that closely. But I added some links to D&D source info on the classes. Both look intriguing. I'll comment more on them later.
Posted by Berliad at 2:57 AM

Email ThisBlogThis!Share to TwitterShare to FacebookShare to Pinterest
Labels: Mask of the Betrayer