B2: Keep on the Borderlands

I finished Enoa4's B2: Keep on the Borderlands this earlier this week, but between following the baseball first year players draft and responding to an interview for the Vault, I'm just now getting a chance to write up my comments. It was a fun module, and is worth checking out if you're up for some low-level hack and slash fun. 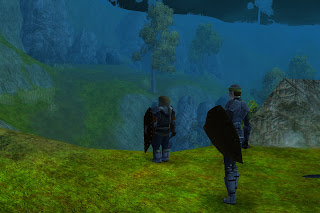 This is a fun, old fashioned, low-level D&D dungeon crawl. It's pretty straight and to the point -- there's a bunch of Bad Things living near the keep, and the local leader thinks it'd be great if you'd go kill them for him. So, off you go to the Caves of Chaos to slay evil and rid the area of their infestation. The thing I really enjoyed about this module was exploring the many intricate and interconnected dungeons that make up the many Caves of Chaos. Each cave housed a different tribe representing a different sort of monster, and each tribe had a "boss" leader of sorts that I needed to kill. 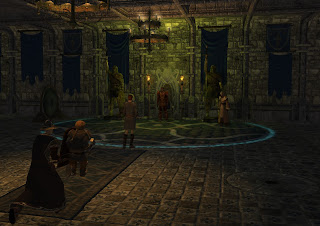 But while that sounds fairly simple, the caves are varied enough, and have enough twists, turns, and variable-sized chambers that it was hard to predict what lurked around each corner. Combat was pretty fast and furious at times, particularly before I advanced a few levels. Furthermore, the caves were interconnected such that sometimes accidentally stumble into a far more powerful tribe's territory, making for a harrowing few seconds as I re-organized my party to deal with the new threat. The overall mood in the module was great, with lots of flavor text from both companions and foes during fights, well designed areas, and good use of the stock music. Equipment rationing seemed just about right for most of the module, though there were a lot of a certain kind of necklace that allowed my character to build up enormous gold reserves near the end of the module. 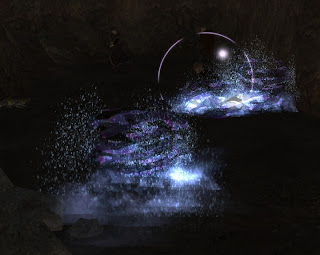 I realize you (the author) are probably not going to be building again, at least for a while, and I'm not sure how much more you'd want to do on this module so long after its release. But I did have a few comments and suggestions. First, I found that while the combat started as a nice challenge, it ended up being pretty easy over the last three or so caves. One thing that might have spiced it up a bit more would be to make the Chief bosses a bit more powerful and unique. They clearly were tougher than their underlings, but rarely did they do anything special, like cast spells, use grenade items, etc, that might set them apart and add challenge to the fights 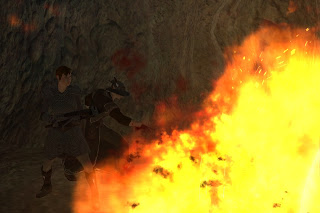 The effort made to flesh out the companions was worthwhile, but it left me wanting more. The interactions and story with the dwarf and the elves were great until their quest was completed. After that, they rarely said anything else for the rest of the module, or if they did, it was a quick bit of text over their heads. Similarly, I'd have liked to have more times during the cave clearing process when I could talk to the Castellian and get new responses. Finally, there still seemed to be a fair number of polish issues remaining, and I also ran into the occasional bug. I'll provide a list of these items in a separate post, in case you decide to address them.

Nevertheless, this module was well worth playing, and I think folks should absolutely take a look if they're interested in a low-level hack and slash adventure. Thanks for sharing, and congrats on the release. If life ever slows down and you get interested in building again, I'll gladly download and play whatever you build! -B