Last night I played the module that placed third in Obsidian's first module building contest, The Rampion Champion. Despite its relatively low Vault scores, I found that it was surprisingly enjoyable, even if very brief. In a lot of ways, it reminded me of some of the better submissions in the Bioware writing contest--very short, but enough to it to be interesting and engaging. My vote reflects more on its brevity than on its quality. I probably still would not rank it 3rd in the contest overall, but I can see how it could be that well-received. 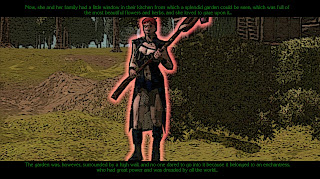 With one of the more delightful, tongue-in-cheek titles of any module I've played, The Rampion Champion is an enjoyable, even if very short, little module. Some users have reported being finished in 5-10 minutes, but I was occupied for closer to 25 minutes, not including the time it took to create a character. The module is light-hearted in tone. You play the father- or godparent-to-be of Rapunzel, and are sent by Rapunzel's pregnant mother on a desperate quest to retrieve rampion (basically radishes) from a nearby enchanted garden. Along the way, you'll encounter some light combat and meet some strange creatures before your adventure comes to a dramatic(?) end. 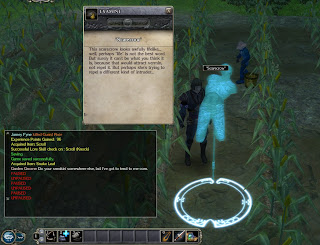 The most remarkable thing about this module are its fabulous cutscenes, which are highlighted by the use of still images that the author somehow created from in-game screenshots. The effect is something that looks like it came straight out of a book of fairy tales, and yet clearly uses NWN2 content. Really awesome stuff. The writing is good, with a nice amount of humor and a couple of interesting characters. There is a fun riddle with a few possible solutions, and the one you will uncover is determined by one's characters' attributes and skills. The combat seemed well-balanced for a soloing lv. 1 rogue (I can imagine the no-rest nature of the garden might make it a bit tough a wizard or sorcerer, however), though it is quite light. Impressively, there are multiple endings for this module, though the end result is not dramatically different.

I did encounter one bug in the dialog scripting. But the main limitation of this module is its length. It ends a bit abruptly--I expected that there would be at least one more interior area in which I'd get to sleuth about. Still, it represents a nice first effort by a new builder, and I hope that she will consider putting together another module in the future.