A Walk in the Woods

I apologize for how long it's been since I've posted something that wasn't just news commentary or what have you. I played A Walk in the Woods over a week ago, wrote up the bulk of these comments then, but somehow never got a chance to finish them and vote on it. So, here we go: A Walk in the Woods is a good little module that is very much in the spirit of the Obsidian Brothers Grimm module contest. Another commenter mentioned that it reminded them of Shrek, and I think that's a great observation. Though it doesn't quite have the level of humor of Shrek, you do get to interact with a sampling of characters from Grimm Brothers stories, including Snow White, Rapunzel, Hanzel & Gretel, out of context from their stories. Your ultimate goal, however, is to help Prince Charming recover from a terrible spell that has been cast upon him by an evil sorceress, all so that he can marry the beautiful Cinderella. 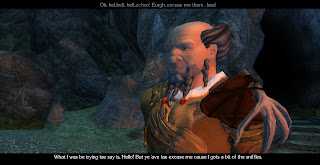 Somewhat like Grimm Brigade, the module consists primarily of a series of mini-adventures with characters from different fairy tales. They are typically hack and slash, but vary from fairly typical dungeon crawls to less conventional mini-adventures. Accompanying you throughout your adventure are two henchmen, Tom Thumb (a very short halfling rogue) and Thumbelina (a fairy wizard). There is a great deal of banter between the two throughout the module, and in my opinion, their interactions were really the highlight of the module.

All that said, in the end, I just never really felt engaged in the module. I can't quite put my thumb on it. Maybe it's the fact that there's not much explanation of who the PC is, and what role they play in the setting aside from being a strong arm. Maybe it's that the story is pretty predictable, and is so light-hearted that it's hard to feel much tension. Maybe it's the combat--it isn't easy, and even features some creative and novel creatures, but the boss fights weren't particularly memorable or difficult. Maybe it's the rapid rate at which you gain experience and the even faster rate at which you accumulate loot. Don't get me wrong, there's nothing that's really wrong with this module, and it's clear that the author put an enormous amount of effort into this, especially given the time constraints of this contest. It's just that the module didn't grab me. 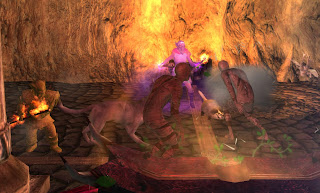 As such, I had a really hard time scoring this one. Looking at the Voting FAQ, I see this written under a rating of 6: It does a few things well but maybe it's a bit routine...it's a good piece of content, but it's a little hard to find superlatives for it. That's pretty much where I'm at with this module, so that's what I'm voting. It is intended to be a positive vote, even if it is one of the lower you've received. Thanks for your submission--I'm looking forward to playing your other modules!