Asylum: A Bet, A Corpse

I planned to start up Pool of Radiance tonight, but ended up playing this shorter module instead. This is probably the first time a module has genuinely surprised me with how good it turned out to be in NWN2. If nothing else, it is a tribute to how creative one can be with this new toolset, but it's also a pretty clever bit of writing and design. I'd absolutely recommend everyone try it (it only will take you 1-1.5 hours to complete). Here is my vote and comments:

My Vote: 8 - Excellent, Recommended to Anyone. 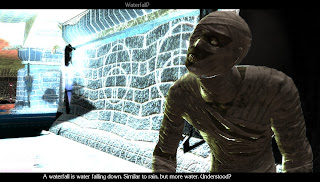 I personally have played well over 100 modules for NWN1, several of which fell into the "bizarre psychological abstraction" genre. But this one probably takes the cake for absurdity. Wonderfully creative ideas throughout. On the surface it's completely random, and yet there is a coherent story here, with pieces that actually do fit together as an intriguing metaphor for the player character's shattered mind. There's good humor here as well, but it's set against the backdrop of something terrible that has happened, which gave the module a very uneasy feeling even as a grinned my way through it. The puzzles are interesting and novel, and fit the setting well. I was particularly keen on everything you did with the chess set, from the weird combat sequences to the actual small puzzle. 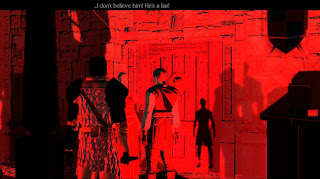 Visually, this module is spectacular, and is a testament to what one can do with this new toolset. There aren't many instances in which it'll be appropriate to push the lighting and tinting to the extremes that it is pushed here, but it works in this case. I was particularly struck by the use of dramatic lighting in the "real world" sequences, and how that was used to convey a sense of absolute horror when needed. Adding to that were the rapid camera changes during cutscenes, as well as the rapid flashes to a black screen and back, which made for some really stirring sequences. I also wanted to commend you on your custom music selections, as they really took the atmosphere to the next level. 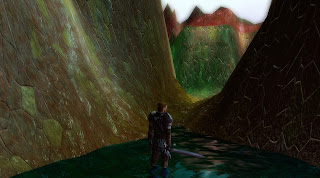 Two minor suggestions. First, while you acknowledge it in your early DM meeting, you might consider recruiting some help from a native English speaker in the community to give your dialogue a pass, as the grammar is sometimes a bit off. In some cases, that actually works really well for the bizarre cast you've created. But other conversations, particularly the real life sequences, it would be nice to have that as well-polished as the rest of your module (edit: the author has just released a new version that does apparently have a number of edits to the dialogue by a native english speaker). Second, there were some times, at least as rendered on my video card (Radeon x1900xt) that the shadow intensity seemed too high. I'm finding that setting shadow intensity somewhere between 0.5 and 0.7 works best. Granted, at times, the completely black shadows make for interesting effects in your bizarre areas, but in others--especially the opening, real life area--I think some adjustment might be appropriate.

Thanks for this module! I honestly had no idea what to expect when I started it, and I found it to be far better than I'd dared hope it might be. I hadn't expected to give votes of 8 or higher to a module this short, but this earned it. Looking forward to the next one!