Last night, I reverted back to version 1.0.2 and re-designed the top floor of the Artist's Refuge last night. Converting all placeables to environmental objects resolved the walkmesh issues I was having. As for the shadows, I opted to leave the main light as it was but to disable shadows on some of the objects lining the walls--they wouldn't create much shadow anyway, and this resolved the issue of them casting a shadow behind the wall. 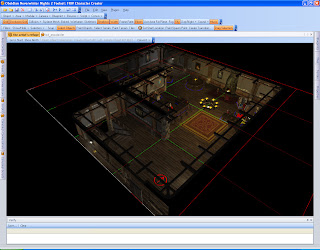 I also added some windows to the upper floor (there was more wall space, and I liked the idea of it being a nice day outside), along with window beam visual effects. It did make the overall lighting in the bar a bit whiter, so it's less of a smoky bar atmosphere...but I think it still works, perhaps better than it did originally. Finally, of course, there is now a staircase that leads down to the basement...and a 'barrelled off" area leading to what will be the top floor of the inn, once I add persistent storage to the module.

I also started work on the basement. I'm going with the mine tileset for now, because I want it to be fairly obvious that it's underground...and something of an auxiliary area. Right now, the stairs open into the training area, through which you can cross to a small library and a small non-denominational chapel. I had an idea about how I might script the combat area today, however, so that it would only require one combat dummy instead of the 5-6 I had planned. The idea would be to initially spawn a low AC dummy, but allow users to select an alternative AC in a conversation and then destroy the old dummy and spawn in a new one via scripting & blueprints. I'll fiddle with it. Anyway, this might mean that the combat area may shrink a bit in favor of the chapel, library, or some other lounging space for players (I want to have sitable chairs at some point as well, at least in a few places around the module).

For tonight, however, I'm going to do some "research" for the character creator and start playing Pool of Radiance, which recently became affiliated with FRW. Wayne released his version 1.1 update today, and I'm itching to play it. I think I'll use a chaotic good elven bard/fighter (need a few extra feats to get two-handed weapon fighting going at low level), as it sounds like that character would fit in well...and I haven't played with bards much aside from that silly Grobnar fellow in the OC.
Posted by Berliad at 1:22 AM