I got a good three evenings of play out of Pool of Radiance ch.1, and it was excellent--I'd rate it just behind Tragidor as the #2 module available right now, and the only reason it's behind is that it's an incomplete tale (which is no surprise, given that it's chapter 1). Here are my comments and vote:

My Vote: 8 - Excellent, Recommended to Anyone 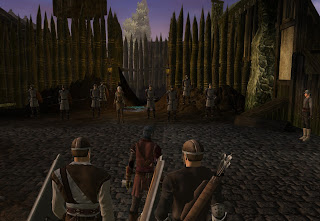 I had a wonderful time playing the first chapter of this module series. It's an exciting low-level adventure that has wonderful atmosphere. The town feels cramped and overcrowded, the people have real personalities and are desperately just trying to scrape by in this new outpost, and the strained, self-serving interactions between the adventurers and the town officials do a great job of conveying the unique circumstances of the setting. Furthermore, while the story is still only just getting started and is straightforward, it is told very well and includes a cool twist or two. This first chapter has just enough to it to make for a satisfying experience, while leaving a lot to look forward to in subsequent installments.

I played an elven bard/fighter (advanced to level 4 by module's end), and while my character was relatively underpowered through most of the module, it proved to be a great choice for the module due to the large parties that I often got to lead. I absolutely loved the mob-like combat that is in this module. It made for fairly chaotic battles, with people running this way and that, and enemies breaking through the front lines at inopportune times--just what you'd expect when you send an untrained group of adventurers into a horde of fairly powerful foes. It got pretty harrowing at times, especially when some of the weaker allies started to get cut down. Overall, I thought combat was very well balanced for my character and offered a great challenge without becoming frustrating or overly repetitive. 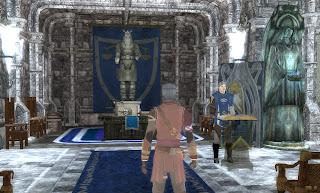 All my suggestions for improvement are small little things that I'll state in a separate post. Overall, this is a wonderful contribution to the nwn2 module scene. I'm really looking forward to playing the second chapter! -B