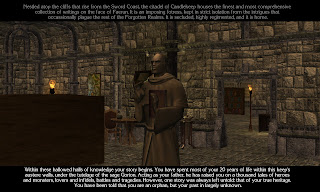 Last night, drechner and his team released a demo of their remake of the original Baldur's Gate. I haven't given their group much attention thus far because, to be honest, the track record of groups trying to remake Baldur's Gate in NWN is abysmal.

But having followed these folks for several months now, and checking out their demo, I'm starting to feel more optimistic. The demo is probably only going to be fun for folks who played the original game, but being one of those, I really enjoyed it. They did a great job recreating Candlekeep almost exactly as it was in BG1. The characters are all there, along with all the basic delivery quests you're asked to do in the prologue. With a few more features--especially including voice acting from the original game resources--this would probably be more fun to play than the original. :) 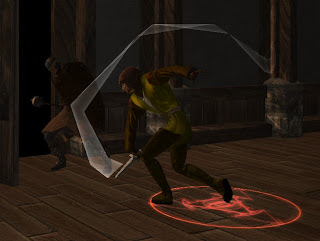 Of course, they have a loooong way to go to remake the entire original game. But it looks like they're off to a great start. My only advice for them would be to not rely on recreating every element of the original game--departures are fine, and a reimagining of the original game might result in a better end product in the nwn2 medium--and a game that takes less time to build. For example, while I'd love to have a huge wilderness to explore, I also wouldn't mind it if they cut a few of the less-important areas in favor of a tighter emphasis on the story. But it's their project, of course. :)

The team working on this doesn't have a true website, per se, but they have been posting announcements on their progress in this thread on the NWN2 Modules forum. There is a link in that thread to some additional screenshots.
Posted by Berliad at 11:40 PM