One of the little things that has annoyed me to no end in NWN2 are the "Buff Balls" that are animated around one's character when using certain spells. The worst of these is Protection from Alignment, which creates a shimmering, distorting sphere around your character that is topped off by a spinning pinwheel of sorts. It looks very impressive, but unfortunately gets in the way of actually playing the game--it's nearly impossible to zoom in on your character and still see anything that is going on around him or her when these buffs are in effect.

Fortunately, I stumbled upon this little tweak by clubok last night: Less Obstrusive Spell Buffs. By simply placing his modified spell buff files in one's override directory (and, quite frankly, this is the first time I've been enthusiastic about putting something in my override directory in NWN1 or NWN2), the buff balls are converted from ridiculous to subtle. Here's a before and after: 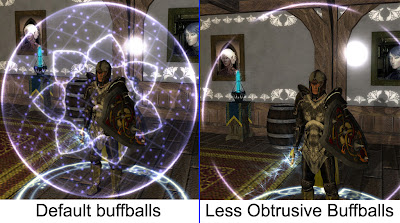 Note that not only is the default sphere very busy, bit it also distorts the light that passes through the sphere. If you imagine that pinwheel spinning and shimmering, you can understand how miserable it is to have this cast one one's character when trying to explore. The override files convert the annoying sphere to something that is subtle and yet still enough to let me know that the spell is active. This will signify a major improvement in my enjoyment of the game. Thank you clubok!
Posted by Berliad at 12:16 AM