I finished Temple of Torm two nights ago, mostly, but then ran into a game-breaking bug having to do with the final boss. Re-did that final battle last night, but it was too late to post comments then. So here they are:

* Vote assumes that the game-breaking bug I encountered will be fixed shortly--it should be a fairly easy fix. EDIT: In fact, this bug has apparently now been resolved! 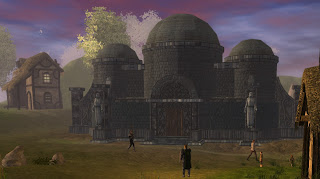 I thought Temple of Torm was a delightful little module, and is one of the better early nwn2 modules to be released. It's story is fairly small in scope, and in some ways feels like a side-quest in a larger module, as your character simply stops by this temple, meets some NPC's, has an adventure, and then eventually goes on his or her way. But it's a good little story, and is told well. Its pacing is good, with little downtime between the time you start the module and when you complete the adventure. I particularly enjoyed walking around and meeting all the young clerics and paladins as I explored the temple. Even though they didn't have any real significance, I thought the effort spent on their conversations made the location come alive in a way that it never would otherwise. 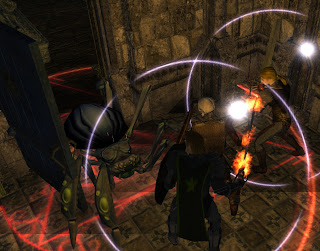 I used a level 12 paladin that I leveled up using my trainer module. He had a full set of +2 gear, including a ring and cloak, and this seemed well-balanced for this module. The Helm of Loyalty that the NPC's so-encouraged me to buy was well past my budget, though Protection from Alignment takes care of mind spells, so this wasn't an issue. Combat was challenging, and occasionally required tactics to win (especially the final battle), but ultimately was fun and very do-able. I didn't have any deaths, though it was a close thing once or twice even though I played it smart (I think). 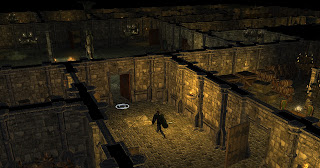 There are a few polish problems in the version I played (v.1.0), and I'm relaying them to the author. Most did not interfere in a significant way with my experience, except for a game-breaking bug I already reported to the author. It has to do with controlling a companion while they kill a major enemy at the end of the module, causing a local variable to be assigned to a companion rather than my own character and preventing me from completing the module. I think the fix for this should be fairly simple. Instead of assigning the variable signifying this individuals' death as a local variable on the player character, you could assign it as a global variable instead. That way there'd be no need to sort out how to identify the actual player character. In the meantime, affected players will just have to re-load from a save before they kill that NPC and re-do the battle.

All in all, though, it's a very good module and is worth checking out in these early days of NWN2. The author has shown himself to be a very capable builder and I'm looking forward to future modules! :) -B