Chronicles of Charnia - Escape from Charn

The last few nights I've been playing slowdive_fan's pair of modules based on the Chronicles of Narnia series by C. S. Lewis. They're a nice little pair of modules in a potentially fascinating setting. Here are my comments on Escape from Charn. I'll post a separate entry for my comments on The Exile to try to prevent overlong-post reader fatigue syndrome. 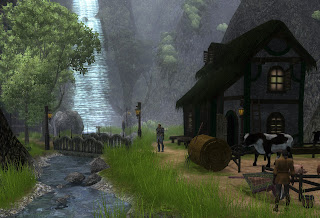 I found this to be an interesting little module with a potentially fascinating universe. I have unfortunately not read all of the Narnia books (I think the last I read was #4...?), so I may have missed some references. But this does a nice job of setting up a very interesting setting for roleplaying modules. I'm still not exactly sure about everything that happened, but I'm intrigued to learn more in future modules.

As others have commented, visually it's a very attractive module. The trailer and closing movies are wonderful, and obviously, the waterfalls are stunning (especially inside the cave). Furthermore, I found the vast rolling hills of the forest to be very dramatic and well done. I love wide open spaces--somehow it reminded me a lot of a cross between KOTOR and Kansas. :) I also really loved the animal companion--that, in addition to Elos, of course, was the element that really gave this a Narnian feel. 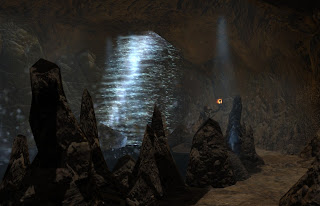 The writing was good overall, though I thought the module's story was a rather rushed. I had a hard time keeping up, because there is a lot to it and it goes by very quickly. Combat is very light (and, with Snowball and his(?) 27 AC, not particularly challenging), sidequests & side areas are fairly rare and very brief, and the story moves along very quickly. I ended up feeling like I hadn't done much when I finished, and yet I'd supposedly traveled across a dark and terrible forest, snuck in and out of the castle of an absurdly powerful tyrant (is she so powerful that she's Elos pack up his people and run away?), and entered a long-sealed cave with a set of precious artifacts. I'd probably recommend either increasing the number of areas through which the player must travel (perhaps the secret entrance is protected by some long-forgotten monster guardian or something), increasing the combat in each area, removing the map pins to allow exploration to play a more important role in the game, or expanding the array of things one can do in the Port Town--or all of the above.

Nevertheless, as an early nwn2 module, this is fun and worth checking out. The concept is terrific, and I'm looking forward to playing both The Exile and your future larger campaign. Thanks for the module. -B