Finished Willowbow tonight. It turned out to be good for quite a bit more than the 3 hours the author predicted. I'd guess it's more on the order of twice that figure. It also turns out that the author just today released a fairly major update, so I didn't vote when I left my comments...though if I had, I think I'd give it a 7 - Deserves a Look. Its visuals, the fact that it's a complete module, and the fact that it offers a fair bit of gameplay make it worthy of this sort of score at this point in NWN2's life...though it'd probably be a 5 or 6 if it were played 6 months from now. My comments: 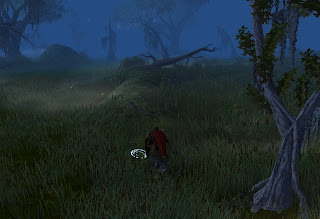 I'm a bit hesitant to leave comments, as I played the previous version and thus anything I say is probably outdated. That's why I'm not voting. But I thought I'd be good to leave feedback anyway.

In general, this is a nice little hack and slash adventure. I thought the audio & visuals were particularly well done. The swamp is beautifully rendered, with what is obviously a lot of attention to detail in the placement of plants, grasses, textures, etc. You might consider using a different skybox, however, as the clear night sky seemed a bit out of place. I love your use of ambient sound in the swamp to set the mood. Combat was challenging but do-able for my lv. 4 barbarian, though I'd certainly recommend that non-melee classes go a level or two higher. I reached level 6 during the final fight, and found it necessary to level up in order to win it (needed that extra attack/round). It's nice to be challenged. :) 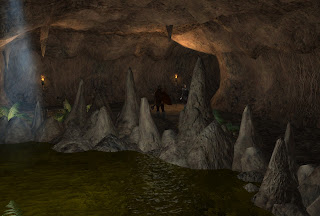 I liked both of the henchmen, though I thought more could be done with them in terms of dialog and story. I really liked how valuable the cleric was, as healing potions and kits are not abundant...and one of her class abilities was extremely handy at the module's end. The ranger's combination of a good bow and two-handed fighting capabilities were fun to use as well, and fit with the setting. Finally, I also liked how you used scaling and tinting to create some novel creatures. The troll hag was particularly cool. :) 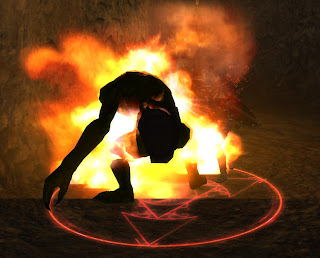 A few suggestions for improvement. First, I'd definitely recommend an option to automatically level players to lv. 4 when they enter the module--the equipment you provide is enough to get started, but I had to use debug commands to get my character ready to go. I did find, as have others, that the dialog was a bit limited (though what's there is good), which makes the module a bit too lonely at times. This was especially the case with the henchmen. The merchants are nice, though I might recommend turning down the payout per item to help their gold last longer. I ended up leaving a ton of loot in the lost and found wardrobe when I exported my character at module's end. Finally, while artistically the swamp was beautifully rendered, the methodical placement of the caves and the structure of the area as a big loop made it feel a bit less organic than it could have been. I might recommend (in a future, similar project) breaking the swamp up into several areas, possibly with some dead ends to better simulate traveling through a huge swamp over a week's time. This might allow you to hide caves here and there in different areas, which would make them feel more like neat areas to discover rather than the next level in the dungeon crawl.

Nevertheless, it's a fine first effort and among the best of the early modules. Also, in case you're planning to do more with swamps in the future, you might like to check out this nwn1 module: Blackwall Keep by ZeornWarlock. I see a lot of parallels with his module and what you've tried to do here.