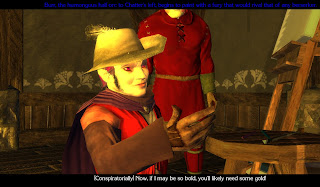 This initial release is functional in that it will level you up, give you gold, and let you do some shopping, but there are a number of features that I would like to add prior to the eventual Vault release.

I'd really like to get feedback from folks on this module as it is now, especially in terms of the equipment selection. The goal is to provide a fairly minimal selection of gear to help keep people from overpowering their characters, but with that in mind let me know if there are additions or subtractions that should be made.

I'm going to take a short break from working on this module and play through Tragidor (using a character I created with this utility, no less!). Once I'm done with that I'll get back to finishing off this module and getting it on the vault.

This module is designed to help players create characters that are appropriate for Forgotten Realms Weave modules. It will level your character and give them appropriate gold for that level. It will also permit you to purchase a limited assortment of items to create a balanced character for any FRWeave module.

One of the problems I have often had with leveler/trainer modules is that they a) don't always give you the right amount of gold for your level, and b) have such a huge selection of items that it is very easy to tweak your character's equipment into an overpowered state. This module attempts to resolve those problems by offering gold at a level recommended by the D&D Dungeon Master Guide, and by granting access to a fairly limited array of items. The assumption is that your characters will need to use stores & loot in other modules to round out their equipment selections. This module is just meant to get them to the point that they'll be able to competently enter a module and perform well.

This module is *not* designed to serve as a trainer to help test out character builds (I have no plans or desire to include combat in this module), and is not a good choice for players who want to "shop 'til you drop" and completely optimize their characters' equipment. It is also not really intended, at this point, for characters above level 13 or so--though you can level to 20 if you wish.

* Subraces with level adjustments (Aasimar, Tiefling, Drow, Gray Dwarf, Deep Gnome) will not receive xp sufficient to get to the requested level. This is because those races require more xp than usual to get to any given level, and is not a bug. ... but perhaps it can be handled a bit more elegantly in future versions.
* Conversation plays the same way each time through.
* Conversation animations aren't all working yet, especially those of Burr.
* Masterwork gear is not in, yet.
* Silver and Cold Iron weapons cost the same as normal weapons. Hopefully I'll have time to update that in the future. I may set them up in a separate merchant with a higher markup.
* Some classes are a bit under-served, particularly arcane spellcasters (not that they really need much equipment). I'll try to address that in the future, though as discussed above, I'm intentionally trying to keep equipment selections a bit sparse.
* Conditional checks are not present for the stores, so characters can always access whatever store they wish. This was done to allow you folks to give me feedback on equipment selections. It was also done because it was late last night when I was finishing this up and I wanted to go to bed! :)
* No FRWeave characters are present, nor is their associated specialty item store, yet.
* Persistent storage is not in, yet.
* Equipment is essentially only suitable for characters up to ~lv. 13 or so (+3 items are the highest available). This might change in the future. Maybe.
* You can't walk behind the bar, nor can you get a drink.
* The gnome is a mildly irritating.

* Any and all scripting is by or modified slightly from Lord Niah's FRWeave Base Mod. Heck, there's very little this mod does that his example DM meeting room does not. Go check out his base module here: http://nwvault.ign.com/View.php?view=NWN2Scripts.Detail&id=55
* Inspiration for Burr and Chatter is partly attributable to Jay and Silent Bob (Kevin Smith's films) and partly attributable to my daughter's Dr. Seuss books.

Update: Another thing on my to-do list is to include some custom low-level items, like +saves vs. fear, poison, disease, death, and mind (no immunity items though).
Posted by Berliad at 3:07 AM