Chronicles of Charnia - The Exile

Here are my comments on The Exile. While perhaps not as visually spectacular (though it's still quite nice), I thought it was overall a better module. Nevertheless, for the full experience, I'd definitely encourage folks to play through both modules. There's an awful lot to like about this setting that slowdive_fan has created in his two short modules. 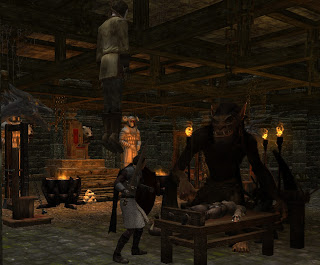 I thought The Exile was much improved over Escape from Charn. The pacing was much better, overall, with challenging combat to punctuate the story and make it feel like one really has to earn one's success. There are also more roleplaying options, with the welcome inclusion of some skill checks in the dialog as well as the chance to make decisions here and there. I also thought the writing, in particular, was much more polished. Fewer typos (in fact, I didn't notice any!), and a bit more vivid. There were some cases in which it was a bit more to the point than probably was necessary (see my comment about the jail) but overall I thought it was good. I particularly enjoyed the talking animals--even those just there for "color," like the dog who says he can't talk to you because he's too busy sniffing something. :)

The story is also a good one, though was one that probably could have been expanded quite a bit if you had wanted. I'd have been particularly keen to meet and have encounters with some of Exile's captains prior to the final fight, as they seemed like an interesting bunch. I enjoyed my companion (Randel), and honestly couldn't imagine going through the module without him (I played a fighter/thief, and hit lv. 5 by the end). 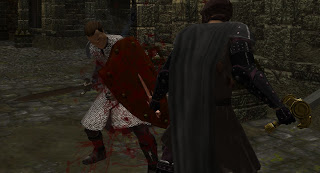 My one major suggestion has to do with the final battle, which was a bit anticlimactic compared to what it could be (modest spoilers follow, sorry!!!). Huge battles must be extremely hard to set up, but as this currently is it seems a bit too easy so long as you don't get the Exile aggro'd on you. I honestly am not sure if it's possible for the Charnians to fare poorly in that fight. In my case, the first time though it was over very quickly--probably no more than 5 rounds of combat. Yes, it helped that I was tossing fireballs, but even so, it was pretty easy.

One approach to make the battle more difficult...or at least more dramatic...would be to try to script it to have multiple waves, each led by a different captain. This was very effective in the larger battles of the OC, as well as the Wyvern Crown of Cormyr, and would allow each captain to play a more prominent role in the game, even if just at the end. You could also try to make the battle a bit more strategic, perhaps by setting up some of the town archers behind some cover and by having some hastily thrown-together fortifications for the townspeople to fight over. Finally, the end of the fight was a bit disorienting because it happened so suddenly. Perhaps you could add a bit of mock-combat as the end cutscene begins, showing the Exile taking out a few prominent town members or something before you-know-who appears to save the day. 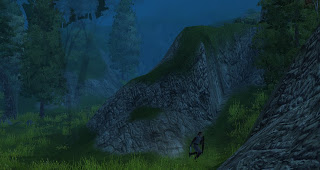 Nevertheless, this is a fun module and is well worth playing. It also shows a lot of promise for a module creator who looks just about to hit his prime. I'm looking forward to seeing what you end up doing with your future work in the toolset. Thanks!