I finally finished Tragidor tonight. Feels good to be playing modules again. :) Here are my comments and my vote: 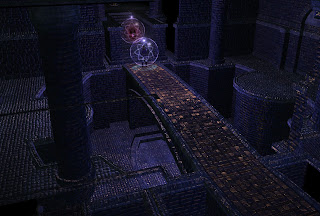 My Vote: 9 - Outstanding, a Must Have

Tragedy in Tragidor sets a high, early bar for what modules can be in NWN2. It's immersive, fun, and has a good, tight story that generally is told well from start to finish. I think this is a great example of what authors can do when they try to stay within themselves. It doesn't try to be too big, but it still has enough to it to make for a very satisfying experience.

Visually it's stunning, and really shows off what the toolset can do. The exterior area design also offers some really innovative gameplay, as the wooded areas require genuine exploration and discovery--something never seen in the OC. I had to rely on survival skill in exterior areas to keep on my toes, whereas before playing this module I'd decided that skill was all but worthless! I was also really impressed with the attention paid to sound. There is a haunted crypt in this module in which the screams of the dead literally will echo in your ears--it's chilling and wonderfully done. 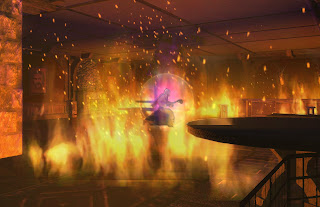 I also just want to briefly commend you on the combat balance. My lv. 6 sorcerer found this module to be an excellent challenge, even with the able help of her companions. It was hard enough that I had to play cautiously much of the time, and I had at least one party member die in several fights, but only once did I have to reload because of a failed fight. I will say that there were a few too many lookout-they're-behind-you-spawns for my taste, but I enjoyed the variety of opponents--especially the incredible hordes of monsters you get to face from time to time. There's nothing quite like the feeling of taking out 20-some foes with a single fireball. :) 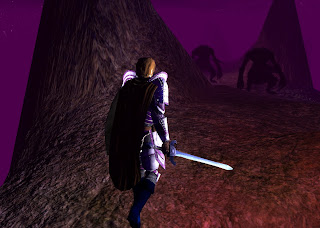 Overall, the module was well-polished, with one exception: the writing. While stylistically the writing is excellent, there was unfortunately an excessive number of typos (at least in the version I played, which was version 5), ranging from simple misspellings, to repeated words, to missing punctuation. This was particularly noticeable in the town early in the module. I'm not overly anal about typos, but in this case it was really distracting. I initially tried to keep track of them, but soon gave up because there were just too many. Therefore, if you haven't already, I would really encourage you to sit down and spend and evening or two giving the writing one last pass. You might not catch everything--and that's ok--but you'd undoubtedly improve it tremendously.

Fortunately, even with that one small mark against it, Tragidor shines as a wonderful example in these still-early days of NWN2's life. Until today, it was the only large-scale, high-quality module available thus far. With that in mind, a 9 on the new vault rating system seems to perfectly sum up my opinion on this module--it absolutely is a must have.